By Melissa Wilson February 23, 2018
It is difficult to create lessons and activities that both engage students and ask them to use and apply higher level skills. It is not our job to entertain our students, but as we all know, lessons and activities that engage students typically leave a lasting impact on their thoughts and future work. We must be cautious, however, and consider that student engagement must be complemented by student communication, collaboration, creativity, critical thinking, and curiosity. If our students cannot take ownership of an activity and be challenged in their actions and thinking, then the engagement we crave does not serve a useful purpose. 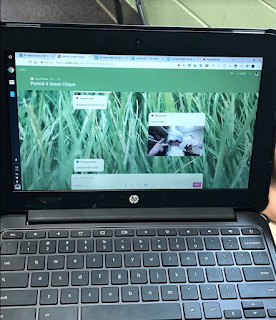 As I always tell my students, in order to truly understand a concept, character, rule, event, or even a historical figure, we must be able to talk about them with others. For example, when I started teaching grammar to my English students, I realized that although I knew and used effective grammar, I did not truly know the rules because I struggled at times to teach it to my students. I couldn't articulate it; therefore, I did not fully understand it. After time and practice, my ability to do this improved. The same goes for our students. Asking them to take ownership of a concept, character, rule, event, or historical figure by not only learning but sharing will ensure a new, improved understanding. This task can be difficult for our students, so as teachers, we must coach them through the process and provide follow-up activities that take their work to the next level.

This week, I had the opportunity to visit Mr. Paul Whisler's AP World History class, and I was super excited about his lesson and the ideas it gave me for my own classroom. The week before, Mr. Whisler contacted Steve Wick and I to ask for recommendations for creating a back channel for his students. The point of his project was for students to "assume the identity of a historical figure, research that person, and then engage in a live 'group chat' playing that role." His lesson idea utilized a backchannel-style format to provide a modern-style social platform where Americans engage in many different conversations. Both Steve and I recommended using Padlet, as they recently released a backchannel option for their users. I had never seen this feature in action; however, after observing Mr. Whisler's class during this activity, I am definitely a fan! 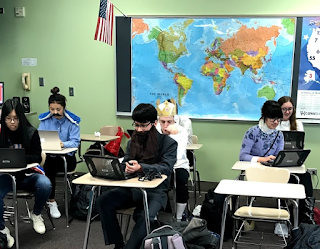 When I walked into Mr. Whisler's classroom, students were in costumes based on their assigned historical figure and separated into 4 small groups. Each group had its own backchannel on Padlet, and let me tell you...student engagement was high. Students were typing, talking, laughing, and enjoying their chats - in character - with their classmates. Due to the power of Padlet, students were also able to add text, videos, pictures, links, and more. Mr. Whisler monitored the Padlets and encouraged students to take their comments to the next level. As I watched the students, I started to think about the higher level skills that embodied this engaging activity. First, students had to truly understand their historical figure and apply their understanding in order to take on his/her persona in the backchannel: think as the figure thinks, vent as the figure vents, judge as the figure judges, react as the figure reacts. Higher level thinking at its finest. By asking the students to have a digital conversation with others, Mr. Whisler prompted an even higher level of critical thinking as students were asked to not only act as someone else but apply their understanding of this person and actually interact with others. Stay in character - and let that character drive their responses. In addition, students gained an understanding of other historical figures by incorporating a collaborative and communicative element. It was quite impressive and inspired me to brainstorm similar activities for my own classroom.


Ultimately....the next level is giving students voice and ownership. After engaging your students, challenge them to take their work to the next level by forcing them to reconsider, revise, evaluate, and reflect. #whatsup