This week, I had the opportunity to visit two very different classes: Photography and AP European History. Both classes were highly engaged and super fun to observe: 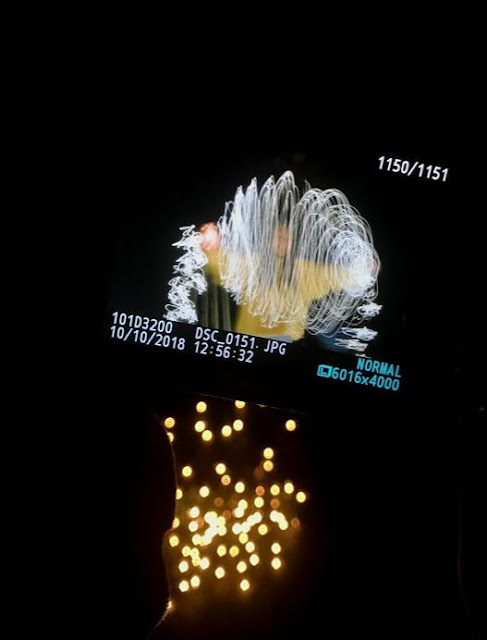 Photography: Students learned how to take pictures in motion using manual settings on their fancy cameras. They went into a dark room, half with flashlights and half with cameras, and practiced taking pictures of light in motion. To end the period, Ms. Bacskai let them have fun with the technique and create their own works of photographic art by bringing in other light options. The result...beautiful, unique photographs.

AP European History: Students simulated a historical trial. Each student had a different role - prosecution, defense, judge, witness, or juror. They had to prepare and really master the assigned role and then play the part in order to demonstrate their understanding of the historical event. Ms. Kagan's students dressed the part and really demonstrated their knowledge of the content. I was extremely impressed with their work, as it is already challenging to speak in front of others. With this activity, there is an added layer of difficulty by having to take on the persona of someone else. 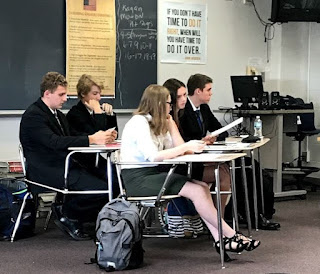 See...I told you they were super different. But here's the thing....both lessons incorporated similar skills to engage and challenge our students. I walked out of each class considering the skills demonstrated and assessed. The rest of the day, I brainstormed ways I could do similar things with students in my English classroom. That's the thing about classroom observations...they always get you thinking about what you can do to take instruction and student learning to the next level

Don't believe that I found connections between Photography and AP Euro? Well, read on to see the awesome skills our students demonstrated throughout both lessons. 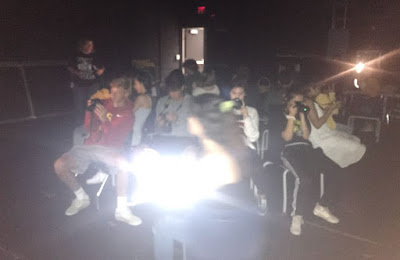 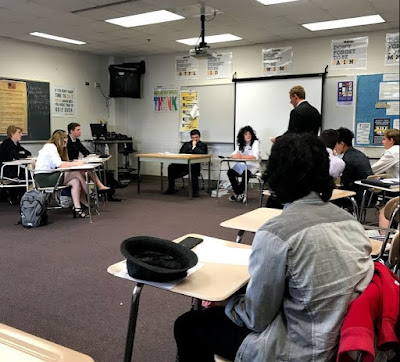 Our students were questioning. They had to consider what others were saying and doing and then ask questions in order to further their understanding. In the trial, the AP Euro students had to pose several questions to the witnesses on the stand. After talking with one of my students who is in this class, he explained the adjustments he had to make to his own questions and preparation after hearing what the prosecution had to say. In order to prove their point, questions had to be asked, answered, and then evaluated for validity and truths. Even students not simulating the part of a lawyer had to consider what questions they had about what others said and what it meant for the person on trial. Whether spoken aloud or not, everyone in that room had to be doing some type of questioning. I know I was. In the A-wing, photography students had to pose questions to their teacher and peers. Ms. Bacskai answered various questions about camera settings and placement of the light. Students also questioned their peers' work with both the camera and lights in order to capture the best possible image and make the necessary adjustments. See the videos at the end of this post to see what I mean. Similarly, both groups of students couldn't just carry out a task. They had to ask questions and plan their next course of action based on how they questioned and what they learned. 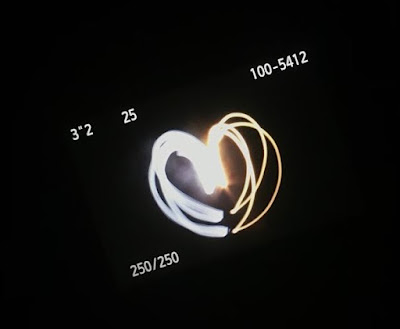 Our students were creative. So much creativity that it was fun to observe. As I'm sure you know, photography speaks for itself...it takes creativity and skill to take beautiful photos. However, I was super impressed with our students' ability to learn a new task and take creative steps to create photos personal to them. Some students captured their names with the light. Others created unique shapes and various designs with the light while their classmates helped them perfect the final photo. Their eyes glowed with excitement and wonder as they brainstormed new creative ideas to make their photos stand out from others. In a completely different way, AP Euro students demonstrated creativity as they took historical events and placed themselves and their understanding of the events into the picture. They had to get creative with the facts in order to help them develop their side of the argument. Students had to read closely and consider various sides of an argument in order to help them prove a point with evidence and validity. Some students had to get into character and really understand how this person's role affected the situation. From there, they had to physically create this situation for others to see and understand which takes critical thinking and creativity. In both cases, students had to take ownership and think outside of the box in order to fully capture their viewer (photography) or peers' / teacher's (AP Euro) attention.

Wowza. Our students are challenged in every wing of this building. The result....they are entering the real world equipped with a plethora of skills that will make them stand out and accomplish great things! It's electrifying!  #whatsup